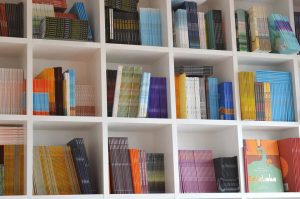 According to the latest report from the “Syndicat national de l’édition” published in the summer of 2016, books are still the top sellers of cultural products in France in 2015. Books are the most sought after, and are placed a long way in front of video games and music. This is very good news in this fully connected era.

“You must read!”, exclaims the comic Dany Boon in one of his legendary sketches. One only has to glance at the work of school pupils and their catalogued grammatical faults, the emails of professionals or even worse, SMS messages sent by teenagers. We no longer know how to correctly write in French. The new information technologies have invaded the market, and electronic books and tablets have stormed into the publishing world; however the book is not dead. On the contrary, book publishing retains its leadership in the French cultural universe. In any case that is what the “Syndicat national de l’édition” has confirmed in its latest and recently published study on the sale of cultural products in France. This report is regularly published by this cultural organ.

In 2015 book publishing showed for, the first time in five long years, a growth of 0.6% in revenue and 3.5% in sales figures. The revenue from this sector reached 2,667 billion euros last year, compared to 2,652 billion euros in 2014. Books were the cultural products with the highest sales in France capturing 53% of the market. Books in their paper version in the publishing branch can still look forward to a healthy future. Video games and music have been left a long way behind.
All manner of books figure in this evolution and book printing still offers an impressive diversity. In effect the number of titles published increased by 8.6%, which translates into 436 million copies sold in 2015. The figure for books sold after being printed last year was 51 million. The only disappointment was in the average print run, which showed a decline of 10.9%, making 5,017 copies in 2015, compared to 5,628 copies in 2014.

Publishing categories: literature at the forefront

The lion’s share was taken by five categories. Literature, with 24%, had the highest sales of a publishing category. Second place went to children’s books, with 14%, in front of practical books (13%), educational books destined for schools (11%) and comics (10%).
Children’s books remain the second most popular publishing sector in France, but they did suffer a heavy financial impact in the order of 8 to 10% of production costs according to a study of the “Syndicat national de l’édition”. This setback was due to the Toys safety test directive concerning these work’s chemical properties. Nonetheless, no complaints have been registered regarding this. In the interests of sustainable development and health for all concerned, this regulation helps to lessen the health impact on man, and especially on younger readers.

Tweet
Personalise your advertising supports and win the loyalty of your clientele with Agenda Afrique
Econuma, the second African forum on digital transformation